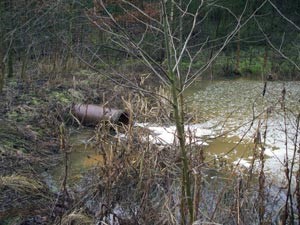 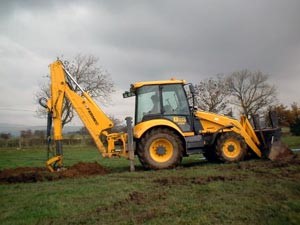 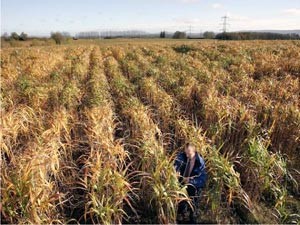 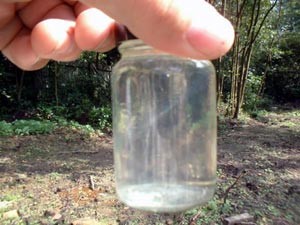 One problem would be that reeds need watering during summer months, while most rainfall takes place during winter months ( the theory ). So we would need to ensure flows continue through summer, else the reeds will die.

One customer calculated it took him 2 days each month to empty and spread the contents of his yard water tank, costing approximately £3000 per year in time, fuel and machinery costs. A 100m2 system for £6,000 would pay for itself in 2 years in time costs alone. Given that fines would be expensive, Melvyn Rutter Reedbeds offer a cost effective solution, producing 90% reduction in pollutant concentrations.

The new water framework directive regulations require The UK Government to force farmers to solve these problems, or face fines. So why not save time, save costs, and reduce the threat of fines. Melvyn Rutter will do initial tests before you spend money on any system. We want to be sure how our Reedbeds will perform with your particular yard run-off water.

We all demand high quality, high volume, low cost meat and dairy products, which require the farmer to produce in ever increasing economies of scale, in order to exist in the market, only for society to blame the farmer for all the run-off caused by our demands.

The outflow is not clear, more like lager than tea. It has been difficult to get on my camera. It isn't perfectly clean, but it is much more suitable to spread on land than the original effluent. There remains no real smell, and the reeds were not burnt, like the grass is burnt by the strength of the effluent.

These results are certainly significant. They are not perfect, but only the most mean spirited would suggest they are not good enough. The way to make further reductions is to :-
• extract the methane and use for electricity and heat
• screen off the solids, as much as is possible from a liquid that is no more than 12% wet solids
• Then pass the remaining liquids through the Reedbeds

Such a system would produce renewable energy, solid farm yard manure with potential for re-sale, and a clean clear filtrate that could supplement yard wash down water.

"It costs nothing to call to have a chat about waste water problems. Between us we should be able to find solutions, and save a few bob in the process. No heavy sales pitch. I always leave you with time to consider your options.
Always happy to offer free advice"

Melvyn Rutter Reedbeds -
We work throughout the UK (England / Wales / Scotland / Northern Ireland / Jersey) and have over 20 years of experience in waste water treatment. Contact us today!